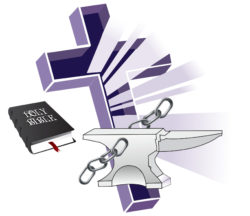 The African Methodist Episcopal Church has been established and working  in Trinidad and Tobago since 1883.

Mr. James Henry Collens, the Superintendent of the Boy’s Model and Normal School in Port of Spain in his book titled, “Guide to Trinidad; A handbook for the use of tourist and Visitors” published around Christmas of 1886, indicates on page 14 that the population of Trinidad “is probably about 172,000”, with population densities of “Port of Spain -35,000 and San Fernando – 7,500”. On page 95 he writes “There is a small body of the African Episcopal Methodist who do not appear to be connected with the older church” (Methodist) “other than by name. It was introduced into Trinidad about three years ago, but seems not to have made much headway. This sect took its rise in the States where the blacks and coloured people were and still are to some extent, denied church membership with whites. Happily there is no such exclusiveness in this colony, and therefore perhaps little need for the existence of a branch of the African Episcopal Methodist Church here unless, indeed, it can be clearly shown that it reaches a class of people hitherto untouched by other religious bodies.” In 2020 the Church is still alive and fully engaged in the fight for social, economic, environmental, and psychological warfare with the spiritual weapons of the word of Jesus Christ.

The African Methodist has been the nursing ground to some the great social architects of the late 1800’s and early 1900’s, shaping the minds and supporting the works of social heroes like Henry Sylvester Williams a member of the Port of Spain A.M.E. congregation under the leadership of Reverend James Matthews. Brother Williams was arguably the founder of the Pan African Movement, which he brought to Trinidad in 1901 with the help of the A.M.E. Church, Brother Williams and his associates Edgar Maresse-Smith, Emmanuel  M’Zumbo Lazar, Cyrus Prudhomme David, Henry Albert Alcazar who were among those who campaigned for the recognition of Emancipation and the end of slavery with a holiday around 1887 almost 100 years before Trinidad and Tobago became the first country to recognize this mammoth event with a holiday on August 1st 1985.

On his return to Trinidad in 1908 Williams attempted to revive the “African Association” and he assisted Reverend Bridgeman, the Pastor of the Port of Spain African Methodist Episcopal Church. At this time Reverend Bridgeman was heavily involved in the education and development of the African Diaspora by hosting social and activist meetings with guest A.M.E. speakers from the United States of America. One such meeting the guest was Reverend C. S. Lord of Alabama, the meeting was held at The Richmond Street Boys School in February 1910, it was chaired by Brother Henry Sylvester Williams and the topic, “The Gospel of Industry” was reportedly well received by the 400 people in attendance.

In 1912 the A.M.E. Church moved to 18 – 20 Woodford Street, Newtown Port of Spain led by Reverend Peter Batson and for over a century Metropolitan has served the people of Port of Spain and the environs spiritually, mentally and emotionally and to this day is still providing education, employment and ecclesiastical guidance to the people of Trinidad and Tobago.

Reverend Dr. Willian H. Mayhew succeeded Reverend Batson in 1916. He fully embodied the A.M.E. Church philosophy of self-help and opened a dry goods store to provide employment for his members and help for his community.

In the early 1920’s the ‘Gaines Normal and Industrial School’ was started by Reverend Dr. William H. Mayhew and by 1931 he was able to report to Governor Rance, the Colony’s Director of Education, 113 children matriculating through the ‘Large’ and ‘Airy’ building, to demonstrate that the school student roll was above the minimum requirement for government subsidy. This primary school has been creating opportunities for the education of the children of the African and Indian diaspora from areas as far as Carenage, Chaguanas and Arima.

Also in the Early 1920’s Reverend T. J. Hercules started the Bethesda A.M.E. Church and the development of the A.M.E. Church in the Central Trinidad area. Reverend Hercules was born in Guyana, studied in the United States and worked as a Minister in the Christian Mission, a church affiliated with the Pilgrim Holiness.  Reverend Hercules became dissatisfied with the white superintendents of his church and left to work independently. In 1918 through Dr. Mayhew, he joined the A.M.E. Church and proceeded to build the central endeavour. Reverend Hercules purchased the land in Montrose and erected a concrete structure which was completed in 1944, he pastored the church until 1959 when he was appointed Presiding Elder of Grenada and Barbados.

Blakely A.M.E. Preschool was started in 1923 by Mrs. Johanna Hercules  and continued by Sis. Lewis the wife of Pastor Lewis  followed by Sis. Emelda Thorne, the school was one of the leaders in Pre-school education for Central Area serving children from Chaguanas, Enterprise Todd’s Road, Chase Village etc providing spiritual and educational foundation to many including Reverend Lyndon Melvin Berkeley M.Sc. (Pastor of Bethany)  who attended from 1981 – 1983, the school is still in operation and approaching its 100th year in 2023.

Reverend Frederick Lewis succeeded Reverend Hercules in 1959 and was able to purchase the property from Sister Johanna after the passing of Reverend T. J. Hercules, Reverend Phillip Thorne succeeded Reverend Lewis in 1969 when Reverend Lewis was appointed Presiding Elder of Barbados and Grenada. Reverend Thorne demolished the old building and build a new structure adding on the Manse and shepherded one of the first mega churches in Trinidad and Tobago with over 2000 members.

Bethany Worship Centre began in1985 as a mission of Bethesda A.M.E. Church in Bhagna Trace Chase Village and for ten (10) years Reverend Phillip Thorne, affectionately called Daddy Thorne and his wife Emelda Thorne lovingly called Mammy Thorne invested in the spiritual growth and development of Bhagna Trace. The church began under the house of Mr. Baptiste and then moved to the house of Deaconess Marie Halls. Sister Halls nurtured the church in its infancy until Reverend Phillip Thorne and the Trustees purchased 7400 ft2 property at Ext #2 Bhagna Trace Chase Village for $38,000.00 in the name of the Trustees of the African Methodist Episcopal Church, (made possible as the Windward Island Conference Board of Trustees were registered to own property by Reverend Dr. Flemming Emmanuel Joseph by Act no. 26 of 1970).  Reverend Thorne had the support of the large and growing membership which raised preachers and church leaders, the church was the center of social development for the area with Sunday school , one of the area’s earliest pre-schools and remedial classes. Rev. Phillip Thorne rallied the membership to construct over the early years a single storey auditorium type structure 25 feet long and 25 feet wide structure with an external toilet. The church structure was built largely by the hands of Mr. Augustine and his sons Curtis and Alton. It was with the migration to Trinidad of Bro. Vinceroy Priam (son-in-law to Deaconess Marie Halls) that  Rev Thorne was encouraged to add to the church, change out the louvre windows for security and create two toilets and a pastor’s office behind the altar increasing the length of the church by 15 feet in the 1990’s and it was the community centre and meeting place.

At the 1995 Annual Conference of the Windward Island’s Conference the mission became a station and the first pastor assigned was the Rev. Carlyle Thorne (Son of Reverend Phillip Thorne). Under the leadership of Reverend C. Thorne the church built a basketball court for the youth of the area on the compound where the Pastor Thorne shared the Gospel through sports and Martial arts and basketball. Bethany also developed the many musical talents of the young people of the church and also hosted ‘The A.M.E Love Hour’ a well subscribed Radio program hosted by Reverend Carlyle Thorne. Pastor Thorne built upon the work of Daddy Thorne took the church to a position of technical competitiveness with overhead projectors and state of the art audio system. With great focus on evangelism and great pastoral care he had over 200 members on roll. Reverend Carlyle Thorne left the African Methodist Episcopal Church Denomination in 2010 and with his departure there was a great exodus which in the words of the Presiding Elder Wayne Anthony “devastated the church”.  He was followed by Reverend Hermione Embrack-Thompson 2010 – 2014 who held the church together by the grace of God with the remaining and faithful 25 members on roll, inclusive of children. Additionally, the community needs had evolved beyond the the church capacity to support, so they did not come to the “little match box church” anymore and the future of the church was quite unsure.

Reverend Lyndon Melvin Berkeley was appointed as Pastor in April of 2014  and the membership outgrew the building by 2015 so major construction works were done to the facility, the ceiling was installed in the old auditorium, the building was extended to accommodate two restrooms male and female with five toilets two urinals and two showers. A pastor’s office complete with restroom, secretary office and lounge on the ground floor, technology centre and recording studio on the second floor and by 2025 the new 250 seating capacity auditorium and 700ft2  Community Development Centre will be completed, and the primary school construction begun (pray for us.)

The church membership crossed 200 again in 2020 and is still climbing Bethany Educational Institute has 20 students enrolled under the guidance of Sister Neyoka N.E. Berkeley B.Sc. and the church has become the center of community’s social activities once again, with our annual Sport and Family Day, Anniversary Thanksgiving, Christmas treat, Vocational Bible School and Back to school support inclusive of Scholarships, the church of Richard Allen is moving on. 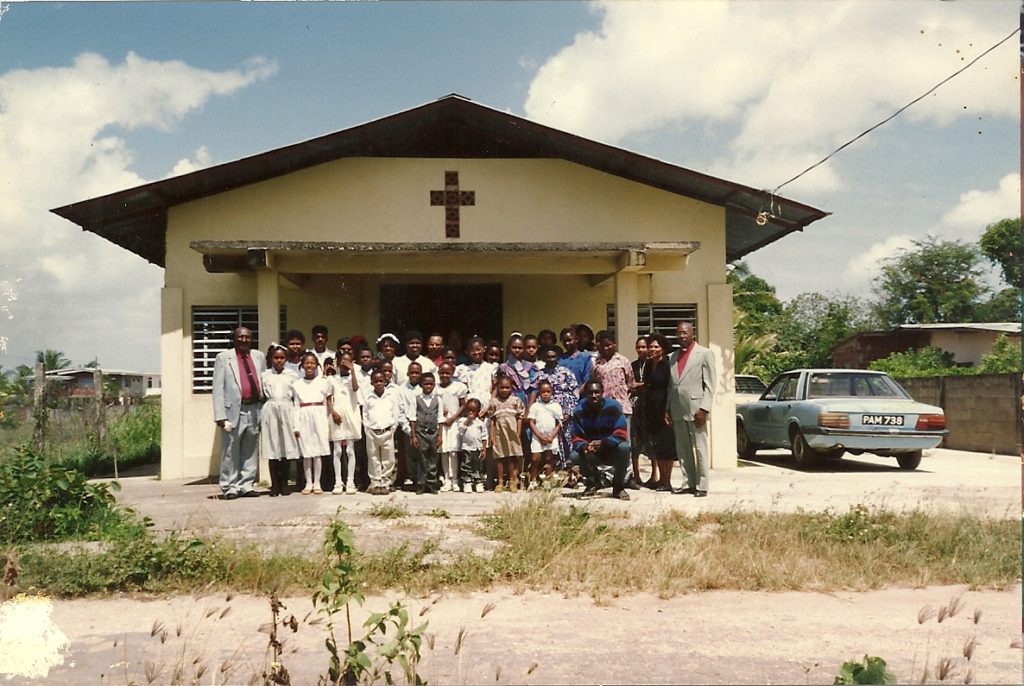 Rev. Phillip Thorne  on the right and Rev. Thorne and the Bethany Family on the left.

To be recognized as a working instrument in God’s service in the satisfying of social, spiritual, physical, emotional, mental, and environmental needs of all the people of God.

Our Mission and Purpose

Our mission is to Minister to the Spiritual, Intellectual, Physical, Emotional, and Environmental Needs of all people, at all times by spreading Christ’s Liberating Gospel through word and deed.